The effect of parent materials and soil evolution on the content and depth distribution of selected heavy metals in soils of Kabudarahang region, Hamedan

Background and objectives: The content and distribution of heavy metals in soil environment are mainly controlled by two broad factors, namely inheritance (geogenic) and non-inheritance (pedogenic or anthropopedogenic) factors. In the early stages of soil development, the status of heavy metals is mainly influenced by the composition of parent materials; over the course of time, however, different pedogenic and anthropogenic processes become important (11, 12). This study aimed to investigate the effect of these factors on the content and depth distribution of selected heavy metals in soils near Mofateh Martyr powerhouse in Hamedan.
Materials and Methods: Six types of parent materials consisting of shale (Sh), schist (Sch), limestone (Li), alluvial plain (Qa), alluvial terraces (Qt) and fan deposits (Qf) were identified in the study area and soil genesis and evolution were studied.Total content of Cd, Cu, Mn, Ni, Zn, Pb, and Fe were determined in both soil horizons and parent materials. The mineralogy of parent materials was assessed.
Results: The maximum degree of soil development in all of the selected parent materials is restricted to the formation of Inceptisols (Typic Haploxerepts and Typic Calcixerepts), mainly due to the limited weathering conditions prevailing in this semiarid region; although, the rate of soil forming processes and, in turn, soil development is relatively higher in soils derived from limestone, which is more sensitive to chemical weathering. In contrast, the higher relative resistance of shale to weathering processes explains the formation of less developed soils on this parent material. In general, the concentration of most selected heavy metals is controlled by the nature of parent material in the study area. The highest amount of zinc, copper and nickel was observed in Sh soils (136.0, 31.3, and 57.7 mg/kg, respectively); accordingly, the highest concentration of these metals was also measured in the shale (121.1, 37.1, and 53.5 mg/kg, respectively). Li soils have the lowest amount of cadmium, copper, manganese, nickel, zinc, lead and iron; the lowest amount of copper, manganese, nickel, zinc and iron was also measured in limestone. However, cadmium content in limestone is highest compared to the other parent materials. By grouping soil horizons and parent materials using cluster analysis, most of the C horizons were located in clusters related to their corresponding pedogenic horizons, indicating the similarity of pedogenic horizons with parent materials and hence the importance of inheritance factor in controlling the concentration of selected metals. However, concentration of metals in soil horizons, particularly in limestone profiles, is higher than parent materials; this is due to metal enrichment in soils during pedogenic processes, especially leaching of carbonates.
Conclusion: The concentration of all metals (except for Mn) is mainly controlled by parent material, and pedogenic processes have minor effects in the studied soils. 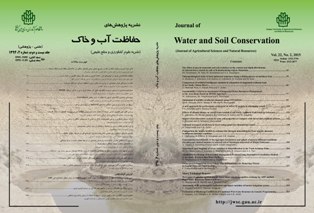